Britton Delizia seems to be living in an alternate universe. This woman has set up a kickstarter campaign titled, “I’m learning to apologize for my metabolism.” For some reason she is of the opinion that fat women are more accepted, and better treated, than women of average or smaller stature.

Where is this happening? Not in the USA I live in. Look at our magazines, how many of the women in them are even barely above average, or average sized? Not many, not many at all. A size 10 is considered plus size in the modeling world, whereas the average American woman wears a size 14.

The average models weighs 23% LESS than the average woman.

On television, 99% of the actors are skinny. On Delizia’s Facebook page, someone mentioned that there are fat people all over tv. Their example? Mike and Molly. Melissa McCarthy and Billy Gardell.

Yes, they are fat and on TV, but, have you watched the show? It is full of fat joke, after fat joke, and the two of them dieting. They met at an Over Eater’s Anonymous meeting. But, that is fat positive show. If that is positive, what would shaming be? 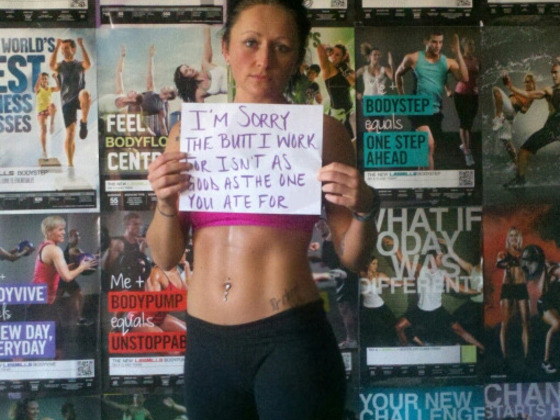 This is the image you see on the KickStarter page. “I’m sorry the butt I work for isn’t as good as the one you ate for,” states the sign in her hands. I do not understand this. In what world are fat women’s butts thought of as better? Not in this one.

“Its undeniable that when we stand a skinny, athletic or even average sized female next to a larger (even if less healthy, overweight or obese) female, that unless we live outside of this stigma, we as Americans will assume that the heavier person is funnier, smarter, nicer, and less sexually promiscuous, all because she is not as thin or physically fit than the girl next to her. ”

Bullshit. Bullshit. The only thing that might be true is as fat people we are thought to be jolly. The rest of it is just full of lies. Why does she think all of this? Is her family full of fat people who pick on her? It sure isn’t society as a whole.

I have been mooed at, hollered at, told I’m a fat ass, judged for the food in my shopping cart, treated like hell by doctors, to the point it almost cost me my life, told (when wearing a yellow shirt) that the “Sun was coming out!” This is just a few of the things I deal with as a fat woman. No one has the right to judge my body or treat me poorly because of their discrimination.

Just as no one should treat a smaller woman badly for their body, but it isn’t happening like that. No one is telling little girls they have to be fat. In fact, they are told the opposite. Little girls are put on diets at 6, 7, 8 years old, told they are too big for the world.

I was 12 years old and went on a diet, I was not very overweight at the time, in fact, looking back, I was about 20 pounds over weight. I ate so poorly, and so little, I ended up hospitalized for more than a week. Yet, people weren’t worried about how little I ate, but about the fact that I was still losing weight!

What? A friend of my mother’s gave me a basket full of plastic eggs, with surprises in each egg. I could open them at various weight loss goals, or when I had gone a week or two without “cheating” on my diet.

Looking back on this as an adult, it horrifies me. How was that allowed and normal that a 12 year old should be that cheered on to lose weight?

Now, I’m a supersized woman, and it is very likely some of my issues date back to starting dieting so young. I got on the cycle of diet, regain, diet, regain, when my body was still developing. I did it because society told me that I was too big, my body was wrong.

No one should have to deal with that, no one should ever be told they are too big, they are wrong, they don’t deserve nice clothes, or pretty things because they are fat. No girl should look around her and quit playing softball because she’s picked on for being too big.

No girl should be made to feel bad in her body, large or small, but it is the fat girls who are harassed, who are treated badly, who are points on frat boys walls as they go “whale hunting.” I see the mean things being said to my 13 year old chubby niece and it breaks my heart.

I know what is going on with her. She’s a tough kid, but you can only take so much picking on, bullying, and hatred, before you absorb it into yourself and start to hate the very body you inhabit.

This kickstarter by Britton Delizia just adds onto the fat shaming and hatred. She claims it is for the opposite, but everything on the campaign page points toward it being just that, “But.. if it just makes it into the hands of ONE little girl who feels like she has to be overweight to fit in with the current 70% of the overweight population of America, and it gives her the strength to know that being healthy isnt a bad thing. ”

Really? Who is telling little girls they have to be fat. No one. Not a single damn person.

Here is the page it comes from: Kickstarter campaign.

Maybe we need a kickstarter that shows pictures of fat women, fat bodies, so that the chubby little girls will realize it is okay to be chubby and happy in their bodies. They really are the ones who are hurt by the body hate.